Silverpoetics projects on a lighter form now also on tumblr, with daily posts of single images. 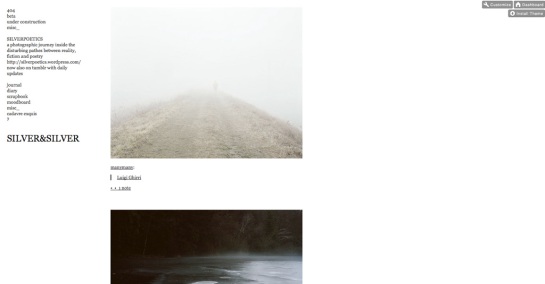 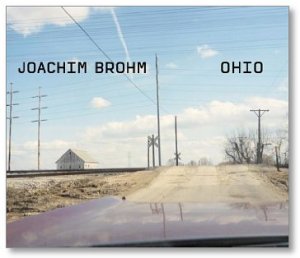 Joachim Brohm’s work demonstrates that there are other kinds of “straight” photography in Germany besides the “Becher school.” The effect of Brohm’s work is comparable to that of the Bechers: he equates reproduction and the autonomous image, realism and abstraction, but his vision is different. While Thomas Ruff, Thomas Struth, or Axel Hutte place classical subjects such as humankind, a landscape, or the city at the center of their work, Brohm’s images seem strangely empty. Their centers seem to have fled; a surface has appeared in front of the camera’s lense that surrounds the actual image. In one image, a high wall obscures a house; one can only see the chimney and the peak of the roof. In another, one can only surmise what can be seen through the holes of a sheet of corrugated iron. Decentralization, the empty center becomes characteristic of Brohm’s work; the dynamic components of the image are pressed to the periphery just as in the paintings of Sam Francis or Clyfford Still.

The coverings – walls, fences, or ceilings – that Brohm photographs stress the two-dimensional character of the photographic image. Sometimes triangles on the edges allow surprising glimpses into the depth of an image, and they prevent one from considering Brohm’s photography as conventional abstract work. Doors and windows also break through the surface. In one of his best works, the structure of a simple rental house’s facade is revealed through its broken stucco. Also, the image is slightly crooked so that the windows are cropped. The special but unspectacular choice of this strange view makes this photograph a rhythmical, appealing representation of muted color. 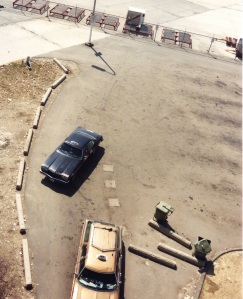 Brohm also moves the central image around the photograph through the use of strange camera angles. In several works it seems as if the camera had fallen forward off the tripod. Instead of architecture one sees street or grass. And these flat forms are imprinted by structures or signs of the past. For example, tire tracks have created a crucifix in the middle of a golf course. Or storms and damage have left behind traces on walls, signs that appear self-referential in these photographs. The photographed traces become traces on the photographic paper.

Characteristic of Brohm’s work is a dark, cloudy sky that appears white in the photographs. Another photographer would light the image so that the sky would have a gray tone in order to differentiate between image and paper, but Brohm prefers to allow the two to merge. Thus, background and subject are combined and create marked forms beyond the rectangle.

Behind these formal concerns, there lies a political and social content. In a new work – an image of a mosaic with classical decoration – small swastikas actually form the pattern. This is not immediately apparent, but upon closer examination they are evident. This mosaic is still in the entry foyer of the Haus der Kunst in Munich which, in 1937, was dedicated to the city by Adolf Hitler as a National Socialist temple of art.
By: Justin Hoffman & Charles V. Miller, Artforum International, January 1, 1993 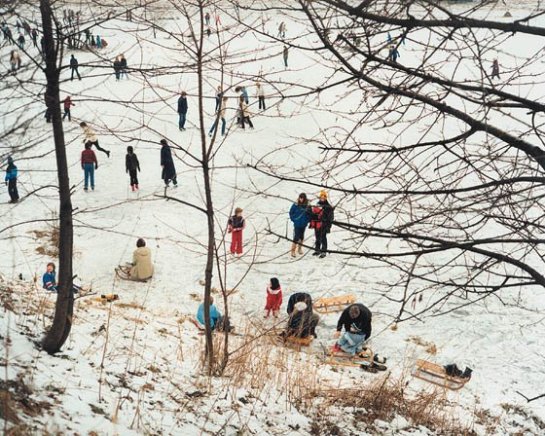 Romancing the banal in a post-print world 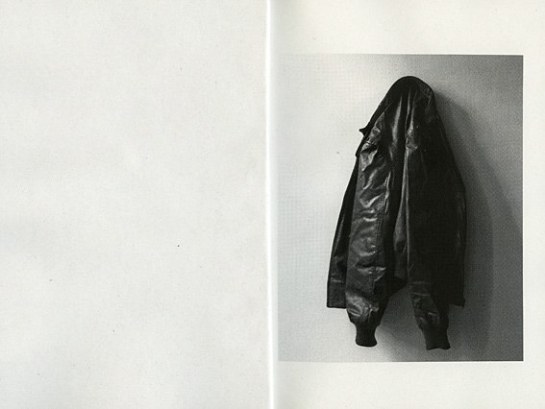 Spread around Paris, Lyon, Barcelona and New York the friends Jeremy Egry (b. 1979), Aurélien Arbet (b. 1985), Marco Barrera (b. 1985) and Nicolas Poillot (b. 1978) get together in JSBJ. These French photographers not only produce their own zines and larger collaborative photographic publications, they also host the portfolio based website where they promote a large number of new and talented photographers.

Guy Debord and Situationist the Theory of the Derive, and Pyschogeography.

I recently came across the essay “The Poetics of the Derive” written by Vincent Kaufmann. Not being that familiar with Debord’s Derive, and only slightly informed of its predecessor from the Surrealist Andre Breton and his walks through Paris, it quickly raised many questions to tackle. Most specifically the idea of looking at the early photographic works of Eugene Atget, and his systematic walks through Paris cataloging the ephemeral Paris of his time. One which was being demolished to make way for the Modern streets and boulevards that Debord and the Situationist would later lament in the same manner Atget did before. Yet, how might this theoretical construct of the Derive apply to the large amount of contemporary urbanscape photography found in the United States. And even more interesting the actual activity the photographer performs in order to find these locations.

Debord’s Derive is not simple a walk through the streets of the city, of chance encounters. Instead one must move rapidly and decisively through the urban space, with intention. When possible the practice should not be done alone, but in groups of two or three. They should be aware of their surroundings, of the “…ecological analysis of the absolute or relative character of fissures in the urban network, of the role of microclimates, of distinct neighborhoods with no relation to administrative boundaries, and above all of the dominating action of centers of attraction…” (link to essay) Thus the most talented photographers who’s oeuvre includes the investigation of the urbanscape. The walk itself, the interaction of operator, camera, and site breaks down the normal relationship we have with public urban spaces. Their activity alone is the Derive.

Breaking the rules of theory to return to Eugen Atget melancholic catalog of a ghostly Paris that is no longer. His photographs present to us the sites slated to be demolished, of the concrete reality of the demolition not just of squares and houses, but of the intricate means and subtle variations of the daily social realities created and maintained through public works and layout.

The pyschogeography. Atget’s photographs of a forgotten urbanscapes now stand like so many rectangular ghost, an archive of ephemera, of power structures that have morphed, shifted, become temporal and translucent. They function as nostalgic tombstones, racked nicely in a file, viewed sequentially, ordered and precise. Are Atget’s photographs any less powerful than they were in his time period? Or does the contemporary viewer see them only as quaint post cards, a romantic bygone era of a dirtier, grimmer, Paris leaving out the pychogeography of that site and the site that will replace it?

If Atget’s photographs have lost their power to be anything more than romantic nostalgic post cards and coffee table books, then what of the contemporary photographers working within the urbanscape. Their photographs present tangible realities, visual stand ins of the power structures, specifically in the United States. Yet is the mere representation of these sites enough, does it go far enough to instigate more than just chance encounters for the viewer looking at the photographs. And what of the Modernist aesthetic formal qualities laid over these sites. Atget’s Paris is grimy, dark, moody. Contemporary urbanscape photographs are made to be as beautiful as they are not in reality. The photographers activity of finding these sites is the derive, the photograph itself is the pyschogeography, the questioning. But unlike the gritty ghost of Atget’s Paris, their contemporary formal presentation, high gloss, bright colours, fends off the questions raised by their derive. Instead the viewer is left with one word, nostalgia. The photograph becomes a representation of the United States political landscape and the power structures in play as it slowly turns and morphs. Instead of critical action and engagement, we mourn. The United States is changing and morphing its political and social power structures while its identity as super power declines. Its intial status symbols and sturctures that came to represent power have shifted, take on new meaning. Like so many tombstones the contemporary photographic formal aesthetic and their beautiful rendering of the dynamic and shifting urbanscape moots any possible critical interaction. Instead we are presented with lovely nostalgia, and pretty memento mori.

Google Map offers a Street View from its website thanks to a smart camera. To see this street views, simply zoom on the map. Then you’ll be able to navigate inside this virtual space of the city and the country.

This competition is based on this incredible bank of images, and only pictures from Street View can be used for it.

The question of photography in this competition deals with images, mechanically taken. Technique is thought differently: what you need is not a camera but a computer screen.
For the first time, street photography doesn’t need the usual technical aspect of photography. Also, it deals only with wandering and observation. Free of a major restraint, this is a new proposition of representation, of an experimental practice.
http://www.risoom.com/

“… We could not immediately find out where the depicted ruins are (or were) located. The Hungarian names might just have been that: Hungarian versions of geographical names (and they have some funny ones: Lengyelorzsag for Poland, no one has been able to explain me this), but they could also have been names for places that once belonged to the Austro-Hungarian Empire or parts of Trans-sylvania, now Romania. I did a short web query and found out that, yes, there are many many ruins in Romania (see e.g. this web-archive), but I could not locate these particular ones. Not that it really matters, we are not planning to re-photograph them, and it is the photographs we are interested in, and how they can transform a place and give it a new presence. I don’t how this is for other people, but for me photography is so little about the what of the image and so much about the how it lets appear things, people, situations. Perhaps that is why it is not a problem for me to see, for example, twenty different portfolio’s made in another recent ruinous place, New Orleans. What could be a problem, is if they all look the same to me. It simply cannot be [or perhaps I should say: I refuse to believe] that a certain place appears the same to each and every photographer that comes along. It would be the death of plurality if a thing or a place has a singular mode of being present in the minds of its beholders, and that, to me, would be the real ruin of our world.”

Mrs. Deane : nothing is too amazing to be true 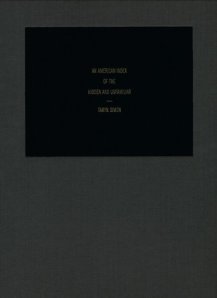 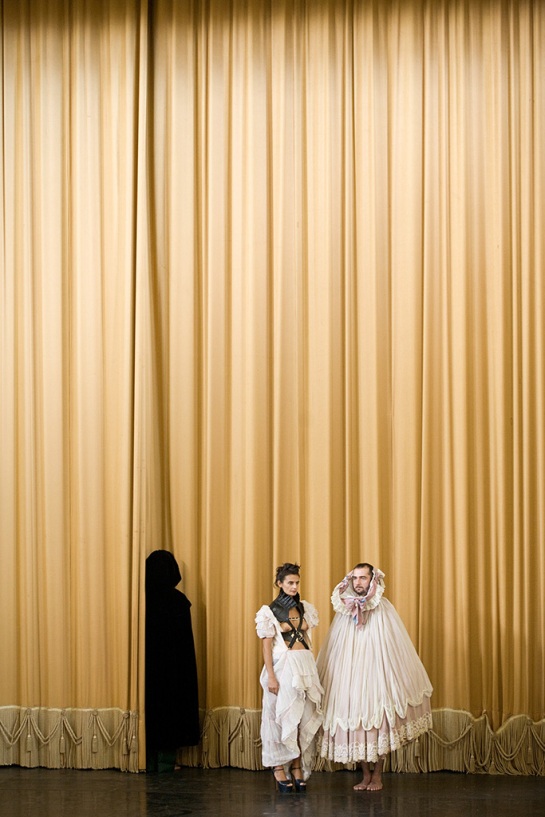 Just like you and I, rock stars all have parents too. In the deep dusty corners of the Life Magazine archives, these pictures have turned up – famous 70’s rock stars with their parents, taken in their parents’ houses.

These pictures are strangely humanizing… They all seem to have real, honest-to-goodness, “normal” seeming families.

Frank Zappa with his parents Francis and Rosemary in California. 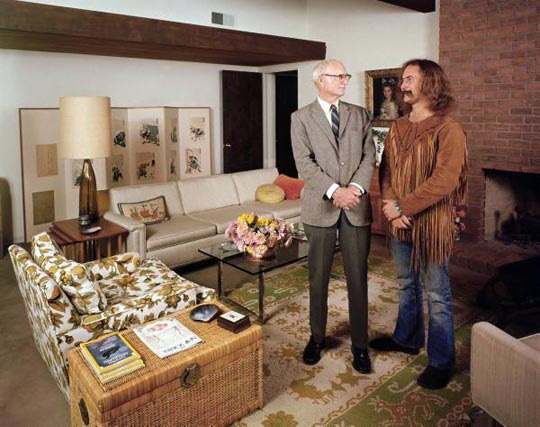 David Crosby with his father Floyd in father’s house in Ojai, California. 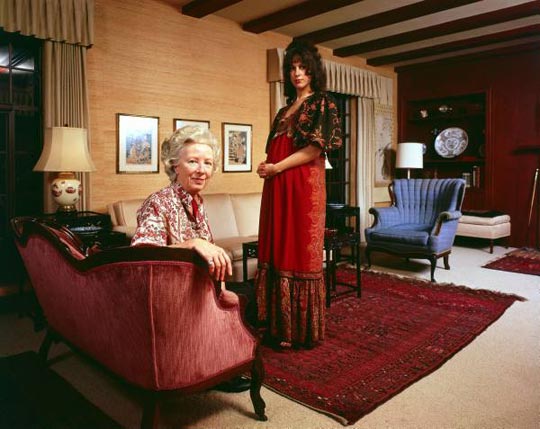 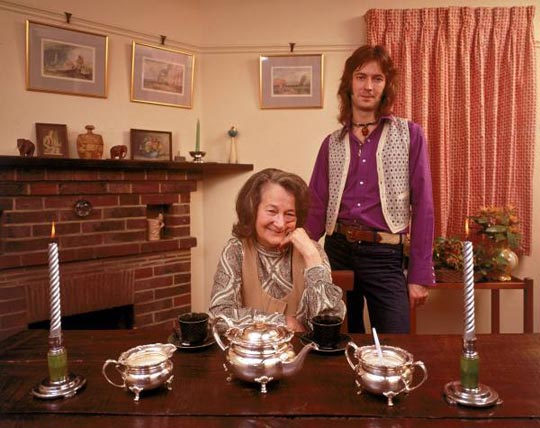 Eric Clapton with his grandmother Rose in the house he bought her in Surrey, England.

Thanks to http://www.noiseaddicts.com/ the online music and audio magazine

“Nothing is too amazing to be true”