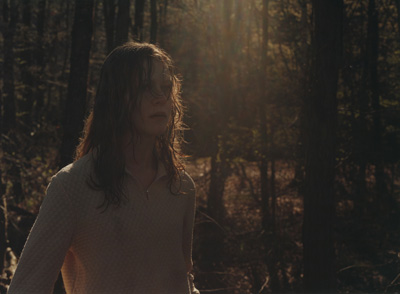 Anyone who ever witnessed a total eclipse remembers the disturbing and yet fascinating moment that precedes the darkness: animals fall silent and cease all movement, everything seems halted, hanging fire. Laura Henno’s photographs trigger the same kind of feeling: the impression that time has been suspended, frozen; and that during this intervening period, human beings are delivered up to some invisible, mysterious force.
Here we see teenagers or very young people lost in their musings or suddenly immobilised by something out of our perception. They indubitably appear to us as characters from a narrative, but we will never know anything about their history, about what they are looking at or what they are thinking of. Sometimes we shall not even see their faces, when they turn their backs on us or are engulfed by darkness. Laura Henno’s photographs are mostly built on pronounced chiaroscuro: the character is alone in the light while the surroundings are deliberately left in shadow. When the entire scene is lit, as in Freezing, in which an icy white pallor covers the landscape, there remains what we might call the “out of field mystery”, the conviction that there is something there of which we know nothing, but which exerts an irresistible pull on the character.
These photographs are not portraits, and psychology is not their concern. Laura Henno’s mises en scène place characters in meticulously chosen settings from which they seem indissociable: they give themselves up to their surroundings, letting themselves be aspirated and maybe engulfed by darkness or murky, viscous water.
In these images, we sense the photographer’s painstaking work with each model: finding just the right pose for the body, the right movement for a hand or a neck, the right expression in the eyes. And what in turn captures our eye is the tension of the character towards a presence which is invisible to our eyes.
The distinctiveness of these photographs doubtlessly reflects both Laura Henno’s profound modesty and intense ambition: she makes no claim to capture the “soul” of a character in a “decisive moment”, she rather succeeds in preserving the mystery of places and beings, because she transcends the trivial and knows what to leave obscure or unsaid.